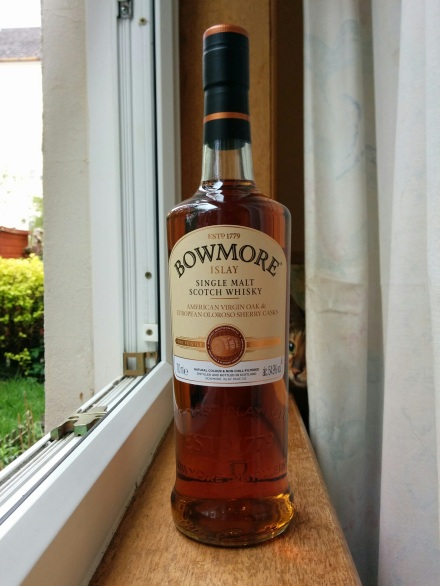 For Feis Ile 2016, Bowmore offered 3 distinct bottlings: a 25 year old “finished” in wine casks for 12 years, a “bottle your own” 17 year old PX sherry cask matured, and a NAS Virgin Oak and Sherry Cask bottling. This review is for the NAS expression which is a vatting of 4 American virgin oak barrels and a first fill Oloroso sherry butt. Some of you may remember that Bowmore released a similar expression for last year’s Feis Ile which was comprised of purely virgin oak casks. What’s with the extra sherry butt thrown into the mix this year? I dunno. Maybe they were just trying to get rid of those virgin casks? Maybe it’s a bit of an experiment? Maybe they thought it just tasted good? Mysteries abound.

While it seems last year’s bottling didn’t elicit too much excitement, I think this year’s Bowmore Feis Ile NAS expression should really be praised. While we did not sample all of the Feis Ile bottlings this year, I feel fairly confident in saying that this is the standout best value whisky of the Islay festival. At £55 it certainly is the most affordable and even though it is an NAS whisky, it’s undoubtedly unique. Virgin oak and peated spirit is rare. I think part of the reason this was overlooked last year was because of the big excitment from Ardbeg’s and Laphroaig’s 200th anniversary. Or maybe it also has to do with the lackluster reviews for virgin oak whiskies from other Scottish distilleries. Some people think it’s too much like Bourbon.

I have to admit that I didn’t pay too much attention to last year’s release or this year’s for that matter. That was until I actually tried it. It’s a powerhouse of a dram. Packed with flavour and complexity. Yes it feels young but in all the right ways! I’ve been disappointed with other virgin oak whiskies but the layers and levels on this one puts all the rest to shame. One caveat is that it’s quite a unique tasting dram so it may not be to everyone’s taste. However, I definitely recommend trying this if you get the chance. The mixture of virgin oak and sherry influence really made something special here. Even if you don’t like it, I believe it will be an eye opening experience. It certainly was for me.

Cask: 4 American Virgin Oak Barrels and a 1st fill Oloroso Sherry Butt re-racked and married together in the original oak