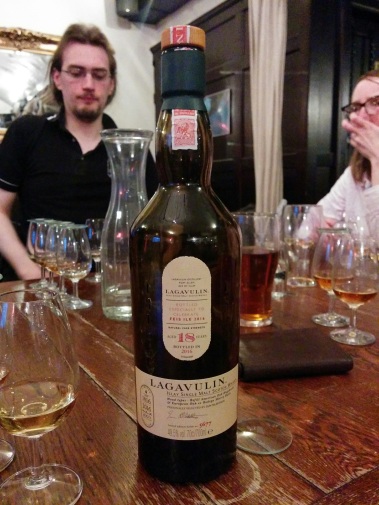 Twas the 200th year of Lagavulin Distillery, and the whiskers were all abuzz about the Feis Ile 2016 release but magistrates at Diageo spoke not a peep about what was perhaps the most anticipated Lagavulin release ever. Only hours before they opened up their doors on Saturday (May 21st), the word spread round that the 200th Anniversary Feis Ile bottling would be an 18 year old with 6000 bottles produced and priced at $125. It was, to be frank, a bit of a let down considering last years 24 year old which was only 3 quid more at £128. To make it even more lackluster, the casks used were not particularly novel for them. Refill bourbon hogsheads and bodega sherry butts. Actually pretty much identical to the Lagavulin Jazz Festival 2015 bottling. And since the globally distributed 200th anniversary bottling was an 8 year old, I was hoping for something extra special for the Feis Ile bottling.