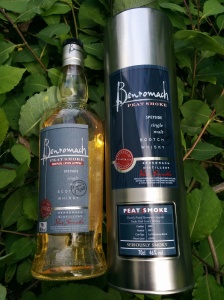 The current Benromach Distillery is owned by the independent bottler Gordon & MacPhail. While the name and site dates back to 1898, G&M installed all new equipment after they bought the distillery in 1992. The old equipment had previously been sold off or junked. Instead of replicating the old stills, G&M designed and built smaller stills. They began releasing whisky from the old stocks and then when their new whisky was ready they began selling from the new stocks. These two spirits, however, are effectively from different distilleries despite having the same name.

For their own distilled whiskies, G&M wanted to recreate an older style of Speyside whisky. While Speyside whiskies are now famous for being smooth and sweet without peat, they used to contain moderate levels peat, when peat was a major fuel source in the area. The Benromach 10 year old represents the whisky profile they were trying to create, while the Benromach Peat Smoke is more of an experimental bottling to see what a heavily peated speyside would be like.