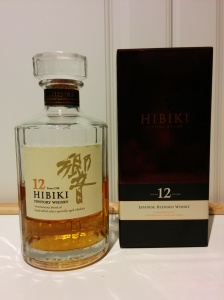 If you’ve seen the movie Lost in Translation, you have heard of the Hibiki blend. You may recall Bill Murray holding up a glass of whisky saying “For relaxing times, make it Suntory time.” Indeed this blend is created by the biggest Japanese whisky company, Suntory. Suntory has a long history with whisky involving the founder Shinjiro Torii and the Japanese whisky king Masataka Taketsuru. I won’t go too much into it now but I’ll write a post on Japanese whisky history later.

The Hibiki line consists of the 12, 17, 21, 30, and the new no age statement Hibiki. The 12 used to be the entry level whisky to the line up but I guess with whisky prices moving on up, Suntory felt it was necessary to introduce something that would take the place of the 12 in price range.

Recent price hikes have been implemented in Japan for Suntory whiskies. See Nonjatta. While prices in the west have soared due to the increased interest in Japanese whiskies after Jim Murray’s proclamations.

Whisky economics aside, the Hibiki 12 is an interesting blend. The word on the street is that part of the whisky going into the blend was aged in plum wine casks. As far as I know this was only done in the 12 year old expression. I really wish they would release a single malt exclusively from plum wine casks but alas they do not seem keen on it.

If you ever see a bottle of Hibiki in the shop, you’ll notice it’s excellent bottle. Some people aren’t as fascinated by it as I am but I think it looks rather smart. It reminds me of something out of an old detective movie. The bottle has 24 facets which supposedly represents the Japanese calendar with some people saying 24 seasons or months. I am not sure which but it is beautiful.

The malt in this blend comes from Yamazaki and Hakushu, while the grain comes from Chita.

Fresh Lychee fruit salad. Wood and mothballs like opening up an old wardrobe. Floral like an orchard in bloom.

Sweet syrupy with hints of peppermint. Some spice like cedar or incense. A warming spice develops from midway through to the finish. Really smooth with a subtle complexity.

I really do like Japanese style blends and this is definitely the go to one for me when suggesting something affordable and tasty for people getting into Japanese whiskies. The Hibiki 12 is smooth and sweet, and a good one for just anytime drinking.