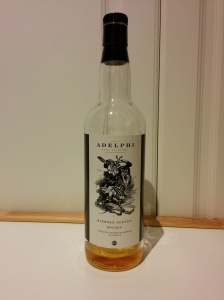 Adelphi Distillery has a bit of a misleading name. As it exists now it is an independent bottler, although they recently built a distillery called Ardnamurchan Distillery in Glenbeg (Est. 2014). The company is named after an actual distillery in Glasgow that started in 1825 and closed in 1902. The great grandson, Jamie Walker, of the last owner of the distillery revived the name for a bottling company.  The company was sold to two lairds and is now managed by Alex Bruce.

The Adelphi Private Stock blend is interesting in it’s contrast to their single cask bottlings. Amongst the sea of their ever changing range this seems to have a bit more permanence.

Tannins like an old wine cask. European oak. Bit of caramel on the top end. Bit of vanilla. Little bit of spicyness at the end.

Bitter with hints of toffee/caramel.

It’s a fairly cheap bottle of whisky at around ‎£20. I’d say for that money it’s decent but I had hoped for more just from their single cask fame. I am not sure how this blend fits in with the other things they do but I guess it is what it is. For ‎£20, I think it’s a of good value. I wouldn’t feel bad using this in a cocktail or even attempting a high ball.