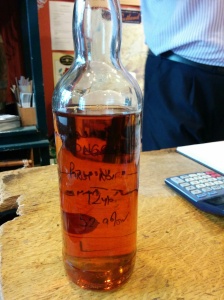 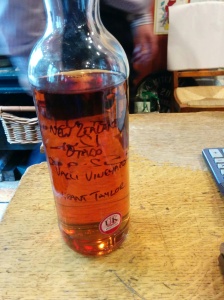 At last! Another Longrow Red released! I am a big fan of the Longrow Red series and I am pleased to see that they are keeping up the good work at Springbank. Longrow is the heavily peated spirit that comes from the Springbank Distillery. Basically Springbank does three core expression lines: Springbank, Hazelburn, and Longrow. Springbank is the most well known and has moderate levels of peat. Hazelburn is unpeated and is named after an old neighboring distillery that Springbank enveloped. Fun fact: Masataka Taketsuru, the father of Japanese whisky, spent a few months at the original Hazelburn learning the craft (this was part of his honeymoon with his new wife Rita). Longrow was Springbank’s response to the peat monsters coming out of Islay. Basically Springbank dedicates certain parts of the year for distilling each type of spirit. No worries, they give the stills a good wash between each.

The Longrow Red series was started in 2012 with the Cabernet Sauvignon.The idea behind the line is to experiment with partial or full maturation of Longrow spirit in various red wine casks (Port is a wine!).

When we went to Campbeltown to visit Springbank Distillery, we were told that Springbank had initially intended to release 4 editions of Longrow Red thus the Pinot Noir should be the last (although the sudden rise popularity may convince Springbank to change their minds).

From looking around on the web, it seems that the first edtion, Cabernet Sauvignon, was not favorably received. The Shiraz seemed to enter the market unnoticed and there were few reviews to indicate the general consensus on it. Then when the Port came out last year, Longrow Red seemed to instantly become a hit. The popularity of the Port meant that there was much anticipation for the Pinot Noir release this year. Even though there were 9000 bottles for each edition, the release of the Pinot Noir saw a shift in attitude amongst retailers, with many retailers limiting sales to one bottle per person.

So far these are the editions of Longrow Red:

So it’s interesting to note that this is the first Longrow Red to not be 11 years old. It also has the shortest maturation in a wine cask.

I was able to try this at the Edinburgh Cadenhead’s Shop. Springbank sent a bottle to the shop as well as to the Edinburgh Whisky Solstice on June 21st (Saturday) for sampling. According to the shop keep, this expression will be available in August of this year. The casks used for the extra maturation were Pinot Noir casks acquired from Grant Taylor’s Valli Vineyards in Otago, New Zealand. Nifty to get this much info on the casks. I am all about cask origins! There will be 9000 bottles of this release.

Cask: Ex-bourbon and then Pinot Noir for 6-12 months

A rubbery peat with dark fruits and berries. Blueberries and black berries. Sweet sticky like teriyaki lime marinade. Almost like sauternes with the combination of sweetness and sourness.

It starts with a sort of licorice mix of sweet, tangy, and spice flavours but it’s not quite like normal licorice. It is only reminiscent in that a bunch of flavours come at once and are twisted together. Rubbery like a Bunnahabhain. There’s a bit of lemon biscuit in there in the middle and toward the end. Quite crisp and zesty. Again really reminds me of some Sauternes finishes I’ve had. There is peat in there but it’s more in the background. It kind of sets a foundation from which the sweetness grows and dances.

I was quite surprised by this one. I am not sure if I have tried a pinot noir matured whisky before but this one tasted very sweet and summery. It really reminded me of some sauternes finishes I’ve tried. I was expecting something similar to the Shiraz edition but this seems much brighter in flavour and definitely less peaty (or at least the peat doesn’t really impose itself as much). I’d say this is quite different from the super popular Port edition. If you like wine finishes then I think you’ll enjoy this quite a bit but if you don’t like wine finishes then I would try this before you buy because it may not be your cup of tea. If it were a blind tasting I might have pegged this for a white wine finish or a sauternes finish (if I didn’t see the colour). Either way I’ll definitely be scooping up a few bottles when they come out!

Very punchy and unique. Complex with a good balance of peat.