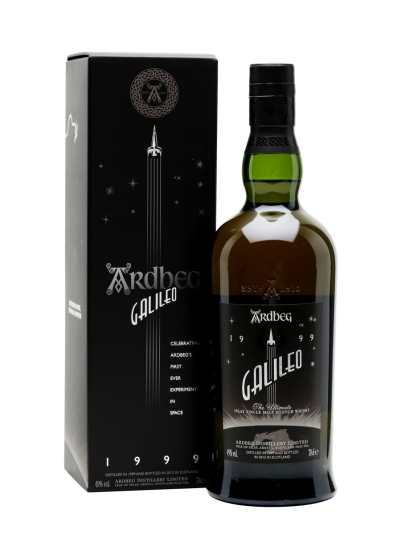 The Ardbeg Galileo was released in 2012 to commemorate Ardbeg’s first space adventure. What’s all this about? Well the story goes that one of the lead people at NanoRacks (a company producing lab equipment for space missions) approached Ardbeg and asked them if they would be interested in doing a little whisky experiment. This experiment was basically to send up Ardbeg spirit into space in test tubes with oak shavings to see how the spirit would age in a micro-gravity environment. Thus the endeavor was to make space whisky. How cool is that? Very cool.

In order to mark the occasion, Ardbeg released this aptly named Galileo expression which seemed to cause a bit of confusion amongst the uninitiated. For a while (and possibly still today) some people thought that the Galileo was in fact space whisky from this experiment. While the bottles did seem a bit expensive at the time, they were no where near expensive enough or rare enough to be space whisky. That’s common sense folks.

I was particularly attracted to the Galileo because my father worked on the space mission of the same name. While I am still looking to buy a bottle at a reasonable price as a gift for him, we were able to get a sample when we visitied Ardbeg with the Water of Life Society. From a whisky standpoint this is quite an interesting whisky because it is, to my knowledge, the only official bottling of Ardbeg that was aged in wine casks (Corryvrecken was aged in ex-wine casks that had been washed out to remove all wine residue). So without further ado, let’s taste!

Thick tobacco smoke and wet oak and a leather baseball mitt. Hint dry red wine sweetness. Pretty much just lives in your mouth. Your breath has become that of an old sea dog.

An unapologetically bold whisky that bares all. It’s heavy peat and heavy oak and heavy leather and heavy sweetness. Every flavour is heavy and dripping with weight. The finish just stays in your mouth and never leaves. The vapours rise from your palate and into your nostrils every time you take a breath. You feel like a dragon. An educated dragon sitting in an old library by a fire reading Shelley. There’s more depth to you than any mortal could fathom. You watch them burn and sizzle away as they attempt to get a taste of you, to comprehend your character. You are Galileo, destroyer of drams.

Nice addition to the Ardbeg team. Not the usual peat monster allowing more cask influence to rise through.

Photo at top from: