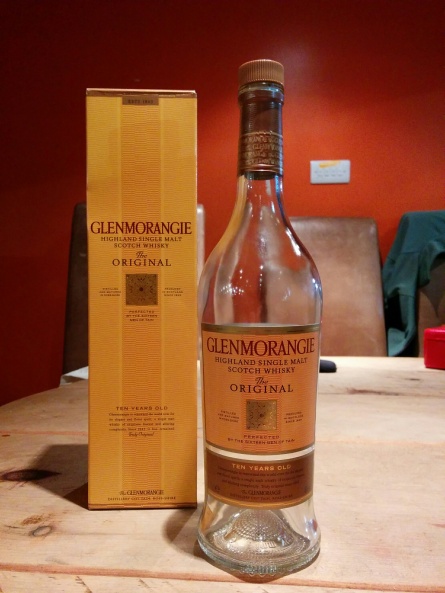 The flagship whisky for Glenmorangie, the “Original” is one of the most available of single malt whiskies. If you haven’t seen this bottle yet, you are either a hermit or you just don’t remember. Glenmorangie distillery was founded in 1843 in the northern highlands region and it is currently owned by luxury company LVMH along with Ardbeg. Both of these distilleries are run by the famous Dr. Bill Lumsden who is responsible for some fascinating experiments in whisky.

With super tall stills, Glenmorangie spirit tends to be quite light which may be why it is one of the few single malts that has generally available official bottlings for ex-bourbon, ex-sherry, ex-port, and ex-sauternes cask matured whiskies. We have the doctor to thank for this selection.  As for the Original, the Glenmorangie site states that the whisky has been matured in “slow-grown and air-dried ‘designer casks’ from Missouri”. Not exactly sure what designer casks means in this instance but it probably means that they have asked for the casks to be treated in a specific manner such as the air drying and perhaps toasting too.

What is interesting about the packaging is that the age of the whisky is not very prominant, which makes me suspect that they may be planning to release it as a NAS whisky at some point in the future. Or at least they are preparing for it in case they run out of aged stock. Well for now it’s 10 years old so let’s see how it tastes!

Gentle caramel with notes of citrus and honey. Creamy like coffee creamer. Gentle bit of sweet spices like vanilla and cinnamon.

A gentle dram with a lovely inviting nose. Quite inoffensive and definitely a good beginners dram. It lacks a bit of complexity on the palate and finish but it’s easy to drink . Probably a good gift whisky for someone who is new to whisky.