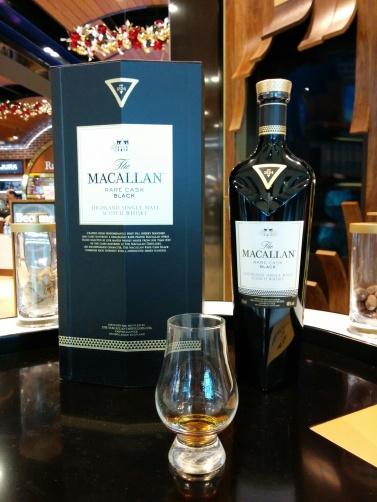 This is the Macallan Rare Cask Black, a truly rare peated Macallan whisky. The newest addition to their 1824 range which is a lineup of premium NAS whiskies. According to Macallan this bottling came from less than 100 casks. They also stated that there will not be another peated Macallan bottling. Some other sources seem to indicate that they are either only from first fill sherry casks (European and American oak) or at least predominantly from those. As you might have noticed from the picture, the bottle is completely black which means it’s impossible to the see the whisky without opening it. Mysterious. These will only be available at travel retail (duty free). If you are traveling this winter you’ll probably spot it. I haven’t seen any independent tastings notes/reviews for this expression yet but I look forward to seeing what other people thought of this peculiar dram.

Very perfumey. Dried flowers. Hint of smoke. A strange familiar sweetness that reminds me of the perfume of a classy nanny like Mary Poppins or something.

Lingering wisp of smoke. And cloying perfume sweetness. Hints of roasted chestnuts. Tangy too and sticks to the side of your cheeks and gums. Very unusual. Tangy like tart oak and over brewed mulled wine.

Not sure what to make of this one. Definitely different and exciting for being peated Macallan. It does seem to have that Macallan character in the type of sweetness but the smoke throws it into another dimension. It’s like bizarro Macallan. Not sure if die hard Macallan followers would enjoy it but maybe it’s for those who are looking for something very unique. I enjoyed it but find it hard to swallow the price. Also wish they didn’t make the bottle black. I like seeing the liquid. It seems to me that this was pretty much made to be a collector’s whisky which is kind of Macallan’s thing these days. With about 100 casks in the vatting and no age statement I suspect there are probably about 20,000 bottles. No official statement yet though. I also wonder if this will truly be the last official bottling of a peated Macallan.

Sources of information for this expression: