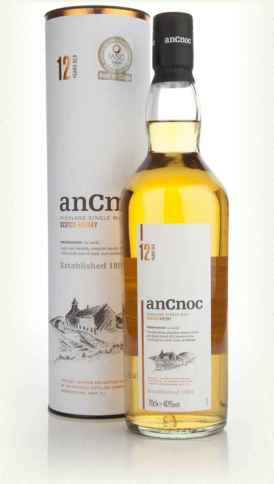 Don’t bother looking for AnCnoc distillery on google maps. The distillery from which AnCnoc is produced is called Knockdhu. If the name sounds familiar, it is possible that you are confusing it with the nearby Knockando distillery. If so, then you have proven the merits of Knockdhu’s decision to market their single malt as AnCnoc. Indeed they were concerned that people would confuse their whisky with that of Knockando.

AnCnoc/Knockdhu is owned by Inver House which also owns Old Pulteney and Balblair. So they have quite the impressive collection of distilleries and seemed to have been very successful in managing them. Judging from the ascension of Balblair and Old Pulteney, I would say that AnCnoc is a single malt to watch! The AnCnoc 12 year old is of course their flagship whisky being the most commonly available around the world.

Cask: Presumably Ex-bourbon (Non-sherried for sure as confirmed by several sources)

Bitter and tart. Kind of bitter the way pills are bitter. Toasted caramel.

Very much what you would expect from a 12 year old ex-bourbon highland single malt. I consider this to be a classic/traditional/stereotypical single malt whisky. A good choice for getting into whiskies and one of the flavour profiles that should be explored before deciding if you like whisky or not. There is a bit more tartness and bitterness than usual which may divide opinions. I think it works quite well with the other flavours so I am for it.

Some bitter notes emerge on the finish.