Kingsbarns Distillery is a new distillery that was built by the independent bottler Wemyss Malts. Douglas Clement was the brainchild for the project and the distillery started producing spirit in 2014/2015 (read rest of post for explanation). The distillery is located near St. Andrews on the east coast of Scotland.

This tour is the perfect introduction to Scotch whisky. You will visit our exhibition space, go on a guided tour of our distillery and then be led up to one of our tasting rooms to try our new make spirit and a dram of Wemyss Malts whisky. A shop and cafe await you at the end of the tour and your ticket price includes a £2 voucher redeemable in the shop against a 70cl bottle of whisky or gin.

This tour is led by one of our senior guides and is suitable for smaller groups who have time to enjoy a more leisurely visit and a longer tutored whisky tasting. Start your visit with a complimentary hot drink in our cafe, before being shown into our exhibition space which explores the history behind the name ‘Kingsbarns’. Your guide will explain how we make our spirit inside the distillery and then take you into a tasting room for an in depth tutored tasting across a selection of Wemyss Malts whiskies where you will receive a complimentary Kingsbarns Glencairn whisky glass to keep.  If you want to indulge in some retail therapy, a shop awaits you at the end of the tour where your ticket acts as a  £5 voucher redeemable against a 70cl bottle of whisky or gin.

We arrived at the distillery on a Sunday afternoon in July. As we pulled off the A917 onto a dirt road, we were unsure of our directions. However, we were soon assured that we were approaching the distillery when we saw it in the distance slightly sunken into a gentle hill side. The distillery seemed to have hybrid architecture with modern and traditional elements. However, when we stepped through the door sof the visitor centre we were greeted by a thoroughly modern interior. 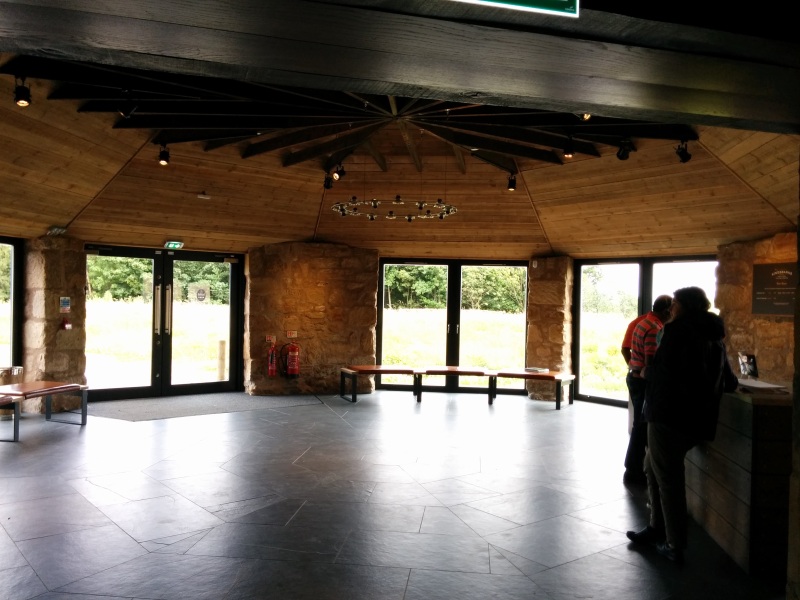 There was decent looking cafe and a well presented gift shop.

We decided to go on the standard Kingsbarns tour for £10. They started the tour by letting us into an exhibition hall with depictions of various distillery related topics. 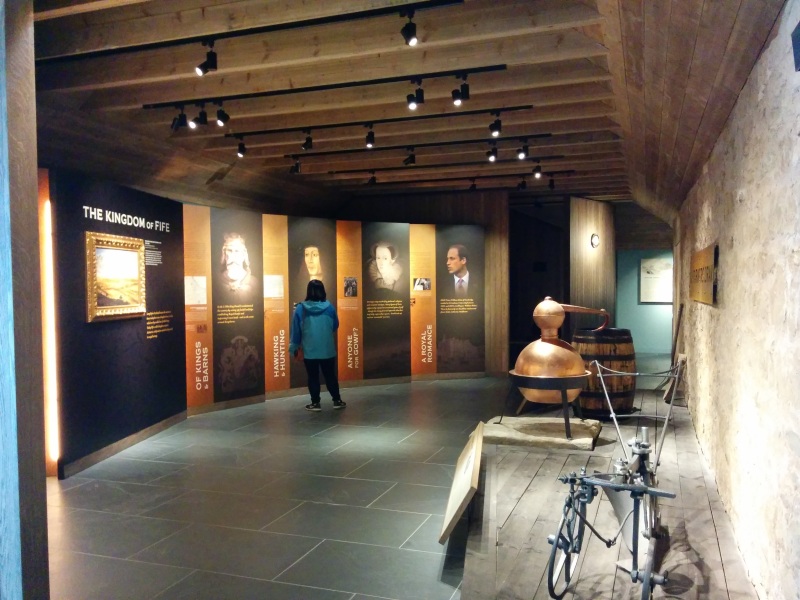 It led to a room where we watched a short film about the distillery. After the movie, we continued to another wing of the hall where they had a display with “smelling stations” where you could test you nose.

And at the end of the hallstanding prominently through a door way was the first cask of Kingsbarns whisky. 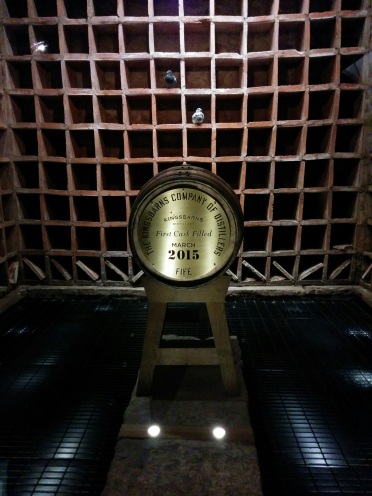 The room in which the cask sat is a doocot (dovecote). This was from the original farm building. A doocot (scots for dovecote) was used a place for keeping pigeons/doves. During the winter this was an important source of proteins as farmers would raid their nests for eggs and sometimes take a few birds for their meals. Apparently the height of the doocot was seen as a status symbol. The tour guide explained to us that the build for Kingsbarns distillery was a converted old farm that used to be a petting zoo in the 80’s where Douglas Clement (one of the founders) used to play as a child.

Due to the historical significance of the doocot, they were not allowed to build any attached structures taller than the doocot. Hence they had to shorten their stills despite wanting tall stills to produce a lighter spirit. To compensate for this they run a slower distillation. So all structures at the distillery are shorter than the doocut except for the malt silo because it is considered a freestanding structure.

The cask within the doocot is the first official cask, filled in March 2015. However, the first “unofficial” cask was filled in November 2014. They decided that the spirit was not what they wanted and changed their recipe, hence the March 2015 for the official cask. All other casks are stored offsite in a warehouse in Fife. They could not get permission to set up warehouses at the facility due to the value of the land as farm land.

Almost all of the production occurs in a single room. You can see that they made their stills as tall as possible within this room. As can be seen in the picture they us stainless steal washbacks.

After seeing the still room we went to the tasting room to try some of their spirits. Since they do not have whisky from their own distillery yet, we were given some whiskies produced by Wemyss Malts (the owners and founders of the distillery) and some of their gin. AliceInWhiskyland was a big fan of their gin. I believe we bought a bottle.

The tour was very nice and we really appreciated being able to takes pictures throughout. It was interesting to learn about how distilleries are started and we definitely recommend a visit!