If you like detailed information about your whisky, then I’m about to blow your mind! I am talking about the Spice Tree Extravaganza from the folks at Compass Box Whisky. First some background on all of this. Compass Box Whisky was founded in 2000 by John Glaser. John Glaser, an American, had been working in the Scotch whisky industry within Diageo when he decided to start his own company focusing on blends and blended malts. His idea was to blend whisky to accentuate the robust flavours of whisky as opposed to the more typical blending for consistency and smoothness.

One of the first creations from his company, Compass Box, was the Spice Tree. Upon its initial release in 2005, the Spice Tree attracted some negative attention from the Scotch Whisky Association. Glaser had used casks with extra French oak staves placed inside to boost the oaky flavours. However, this practice was regarded as “illegal” by the SWA and the production was forced to stop. Undetered, Glaser sought to produce the same flavours by instead using casks with heavily toasted new French oak heads (the circular ends on the cask). This method was allowed by SWA and thus the Spice Tree blended malt has lived on. This “second coming” of the Spice Tree was released in 2009.

The Spice Tree Extravaganza, released in 2016,  commemorates the 10th Anniversary of the banning of the first Spice Tree. As you can see, the folks at Compass Box can be a bit cheeky with the SWA. They certainly have clashed a few times and this release seems to have a double entendre. Compass Box were recently in hot water with the SWA for their release of “This Is Not A Luxury Whisky” and “Flaming Heart” in 2015. The reason for the dispute was that Compass Box had released detailed information for the components of each whisky including information on distilleries, age, and cask type. Apparently this goes against some arcane European law which states that it is illegal to provide any age information for alcoholic beverages other than the age of the youngest component used. While the information for these whiskies were not printed on the bottles, Compass Box provided the details on their website. So apparently this law extends to any publicly available information regardless of media type.

So what did Compass Box do? Well there is a loophole in the law in which the age information can be provided if specifically requested by individuals. Thus if you go to the web page of the Spice Tree Extravaganza, you’ll see a button that says “Request Age Info”. If you click this button, you’ll be shown some information about the EU laws pertaining to spirit age information, and you’ll be able to enter your email address to have the age information for the Spice Tree Etravaganza emailed to you. A bit convoluted but where there is a will there is a way! In the email, Compass Box ask that you do not share the information as to avoid any more legal issues concerning the matter. They are, however, spearheading a whisky transparency claim which you can find out about here. 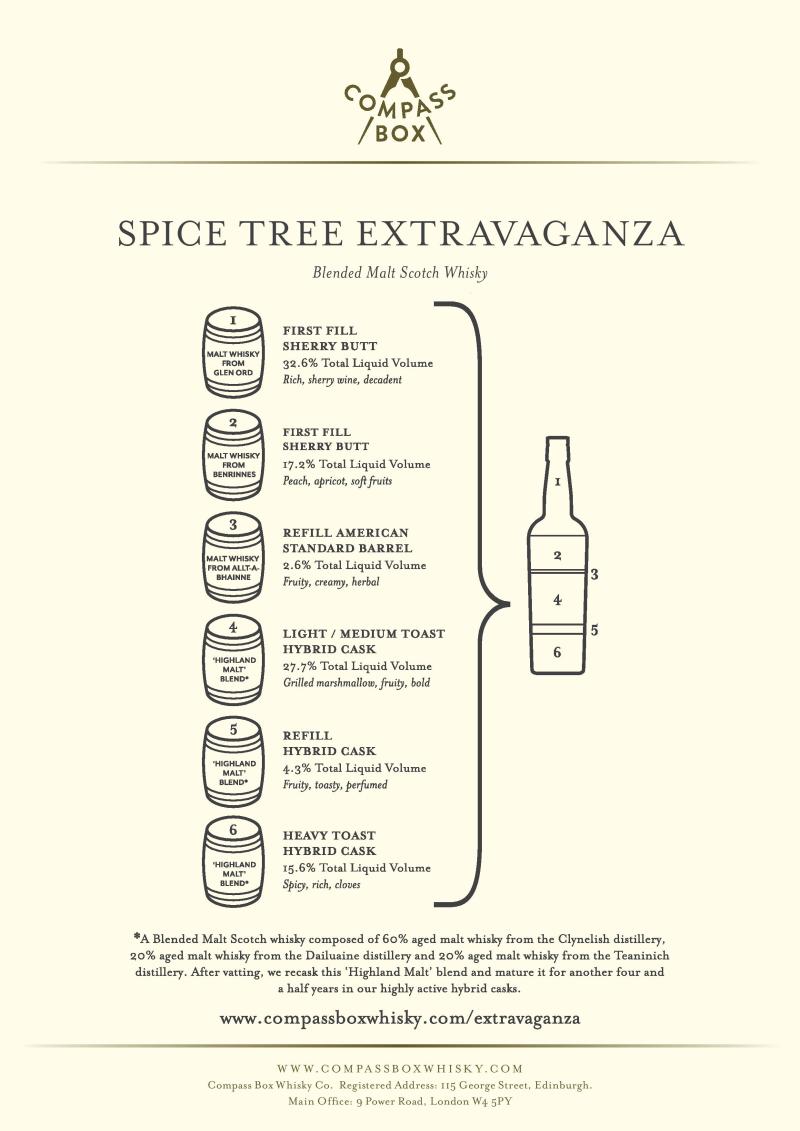 Age: No Age Statement (but component breakdown is available) Bottled in August 2016.

Explosion of spice and sweetness and oak bite. All mixed together like a potent licorice candy. Spice is hot like hot tamale candies. Sweetness like twizzlers. A bitter oak bite reminiscent of root beer. Coco cola candies. Hint of baseball glove leather.

The nose on this is just sublime. It’s seductive with deep mysteries and exotic promises. It’s potent and austere. Brooding yet inviting. Refined. Reminds me of a Mr. Darcy with a hint of Bingley. The body is explosive but it almost masks the complexity. With water it opens up but it’s fun at full strength. The finish is long and meanders through different flavours. It’s quite a dram. Definitely worth a try. It’s definitely bold which means it may be a bit of an acquired taste but much like caviar or uni, if you like this kind of thing, you’ll be craving it all the time and the mention of it will make your mouth water like a good little Pavlov dog.

Image at top sourced from: